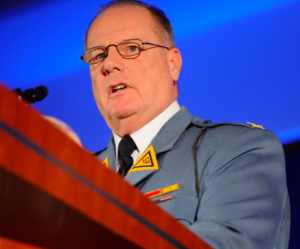 Rick Fuentes has had almost four decades of experience in law enforcement as an enlisted member with the New Jersey State Police. He holds a doctorate of philosophy degree from the City University of New York with a published dissertation on the domestic business operations of Colombian cocaine cartels. In his capacity as superintendent, Mr. Fuentes also served as the State Director of the Office of Emergency Management. He managed more than 25 presidentially-declared states of emergency in New Jersey, most notable being Superstorm Sandy in 2012.

Mr. Fuentes has served on a variety of law enforcement boards. He has served as a member of the Executive Committee of the International Association of Chiefs of Police, the general chair of the IACP State and Provincial Division, chair of the IACP Homeland Security Committee and served six years as a member of the Second Executive Session on Policing at the Harvard University John F. Kennedy School of Government. During 2015-2016, he was selected to participate on the DHS’s Homeland Security Advisory Council Customs and Border Patrol Integrity Advisory Council. He has also served as a charter member of two main law enforcement advisory bodies to the United States Attorney General: the Global Advisory Working Group and the Criminal Intelligence Coordinating Council. For five years, he was a seated charter member of the Director of National Intelligence’s Law Enforcement Partner’s Board.

Following his retirement from the State Police in November 2017, Mr. Fuentes established a law enforcement and security consultancy committed to working projects in the interest of public safety. Much of this work is carried out on behalf of the Miller Center. He is also a Principal Policy Advisor to the Center on Policing.