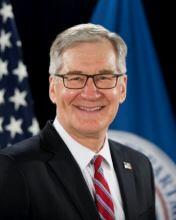 Friend of the Miller Center

Russell C. Deyo is former Acting Deputy Secretary of Homeland Security (DHS).  He was the second-in-command of the Department with a $60 billion budget and a workforce of 240,000 individuals throughout the world.

Prior to becoming the Acting Deputy Secretary, Deyo served as Under Secretary for Management at DHS since May 11, 2015.  In this role, Deyo oversaw all aspects of the Department’s management programs, including human resources, funding, and other administrative lines of business.

Mr. Deyo has over 30 years of management experience in both the government and private sector. Prior to joining DHS, Mr. Deyo retired from Johnson & Johnson in 2012 after 27 years of service, where he held a number of positions, including Vice President of Administration and General Counsel. For 16 years, he also served as a member of the Johnson & Johnson Executive Committee, the company’s principal management group for global operations. His diverse experience includes overseeing human resources, procurement, contributions, philanthropy, legal affairs and compliance as well as serving on the management boards of several Johnson & Johnson consumer and pharmaceutical operating companies. He also had responsibility for the Office of Corporate Secretary, Government Affairs and Policy, Privacy, Security and Aviation.

Prior to Johnson & Johnson, Mr. Deyo was an Assistant U.S. Attorney for the District of New Jersey from 1978 to 1985, serving the last three years as Chief of Special Prosecutions, receiving commendations for outstanding service from the Attorney General and the Commissioner of Customs. From 1977 to 1978, Mr. Deyo was an attorney at Patterson, Belknap, Webb & Tyler in New York City.