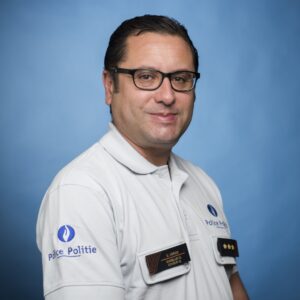 Saad started his career as deputy superintendent in charge with the implementation of community policing  in daily processes from 1998 to 2002, in the north of Brussels, a difficult multicultural area that has produced many terrorist foreign fighters. He then led a judicial team in two different districts, before joining the General staff of the Brussels Chief of police in 2006. For a period of 7 years, he was tasked with the coordination of public order issues, radicalization, and international relations.

In 2011 he became a member of the National Task Force for the Syrian Fighters.

He was also tasked by the European External Action Service as team leader in Myanmar, after communal clashes between Muslims and Buddhists erupted, leading to a reform and a training program of the police service, within a global framework of democratic transition.

He was then appointed Deputy-Director of the Intervention service in Brussels and had to manage the terrorist attack of 22 of March 2016.  He also articulated an exchange program between the Moroccan anti-terrorist police and the Belgian police, in the context of the Syrian war.

After his nomination as Chief-Commissioner, he was then appointed strategic advisor of the Commissioner General of the Belgian Federal police, mainly in charge with operational matters, counter-terrorism and the follow-up of the Syrian fighters issue. He is still holding that position of strategic advisor.

He currently  also holds the position of expert in the Belgian government body, the Coordination Committee for Intelligence and Security, that prepares the National Security Council.

He is on a regular basis guest speaker in many conferences in Europe, USA, Israel and Canada, as well as contributor to different European and Israeli think tanks.