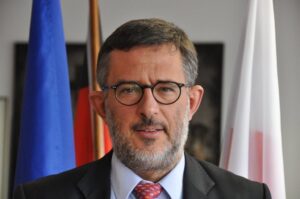 ‘Avoiding another Kristallnacht means standing for freedom and democracy’

President of the State-Agency for the Protection of the Constitution in Thuringia (State Domestic Intelligence Service) since December 2015. The agency’s task is to avert all efforts meant to harm the State of Thuringia, Germany, the free democratic basic order, and the German population on the state level in cooperation with the federal and other state agencies. To this end, the agency collects and analyses information about extremist, terrorist, and any other efforts posing a threat to security, and about foreign intelligence services’ activities directed against Germany. The predominant purpose of collating all gathered information is to keep the Government informed about the security situation.

– Secretary General of the Central Council of Jews in Germany (Zentralrat der Juden in Deutschland) from April 2004 until January 2014 and head of the office of the European Jewish Congress in Berlin.

He studied law, economics and social science (B.A. and M.A.). He is Vice-Chairman of the board of trustees of the AMCHA-Foundation Germany, a member of the advisory board of the Padeia Institute, Sweden. He serves on various advisory committees for projects against Racism and Intolerance, of Civil Society and Remembrance, also on the international advisory board of the Holocaust Museum in Macedonia.

He is an active reserve-officer of the German Navy (Lt.-Commander) and teaching political science and security policy at the German Naval Academy in Mürwick. He served also with the Military Counterintelligence Service (MAD) dealing with counterintelligence, the detection of “anti constitutional activities” within the German Armed Forces and the protection of German Armed Forces from sabotage and foreign espionage. He is a longstanding member of the German Council on Foreign Affairs and the German Atlantic Council.

‘Avoiding another Kristallnacht means standing for freedom and democracy’